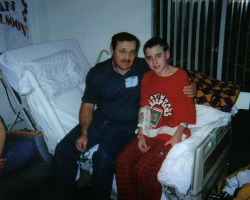 One night in the fall (2003) Ryan came home from working at Wendy's. (This was just before he became sick.) I had gotten up because I was unable to sleep. Ryan stopped & began to talk to me. I could see something was bothering him. He finally said, "Mom, I've said something I shouldn't have & I've been having thoughts..." We talked together a little longer and then I said, "You just need to pray and ask God to forgive you. And Ryan... it's normal for guys your age to have some thoughts about life." Ryan just said, "Yes, but it isn't right Mom." Ryan told me, "I'm going to go take a shower now. I love you Mom." After Ryan left the room I thought, "Why didn't I ask him if he wanted me to pray with him?" That's what I usually did. When I heard Ryan leave the bathroom, I went back to his room. He was on his knees, beside his bed, praying. I knelt down beside him & prayed. Afterward we hugged and went to bed.

In October 2003 Ryan began to have visual problems. Ryan was eventually admitted to Columbus Children's Hospital for testing. (11/3/03) Mike and I left Ryan that evening, watching videoes and eating snacks. We came home late the following evening. Ryan was in such a terrible mood! Instead of leaving him home with Mike and the kids, knowing he would start an argument, I took Ryan with me. As we were driving to the pharmacy to pick up his prescriptions, Ryan began to talk to me. It didn't take long to realize he was angry with God. Ryan was so frustrated that he wasn't allowed to drive, just when he was beginning to experience more independence. Finally, I said, "Ryan, think back to a garden. Decisions were made there that God wasn't responsible for. With those decisions came sin, sickness, and death. God wasn't responsible for that." Ryan vehemently said, "I hate the devil!" I thought to myself, "Now you're blaming the right person!"

Ryan never experienced that anger again during his illness, no matter what happened on any given day.

When Ryan was admitted to OSU (Dec. 03) he was SO sick! He was aphasic (unable to speak or understand speech), confused, and unable to care for himself. He needed constant supervision and care. I didn't realize at the time that Ryan wouldn't know or recognize anyone for the next month. There were many times he would look at me and ask, "Who are you?"  When I replied I was his Mom, he would sometimes say, "No you aren't! I don't know you." What a look he would give me! It was as if he were thinking..."She's trying to trick me. I would know my own mother!" I learned something very special. While Ryan didn't know who I was...he still knew who God was.